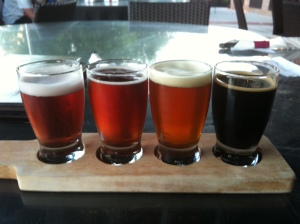 On Friday night I went over to the Dogfish Head tap takeover at Uno’s Chicago Grill in Bensalem, PA. I ordered one flight and one 120 minute IPA. The flight contained four beers. Sixty-one, Black and Blue, Burton Baton, and Palo Santo Marron. The Sixty one is twist from the 60 minute ipa and uses the same ingredients plus the addition of Syrah grape must. I enjoyed this beer, it was very easy to drink and had great flavor throughout. The second beer in the flight was the Black and Blue. The Black and Blue is a Belgian-style golden ale fermented with black raspberries and blueberries. This beer was a little too sweet for my tastes. The third beer was the Burton Baton, an oak aged English old ale Imperial IPA hybrid. This was my favorite beer of the flight. It had a great hoppy taste and nice accents from the oak barrel. The final beer of the flight was the Palo Santo Marron brown ale. This beer is a great winter beer so the fact that it was 90+ degrees when I was drinking this took away a bit of the enjoyment but overall it was a good ale with hints of vanilla and caramel.

Along with the flights I also ordered a 120 minute IPA 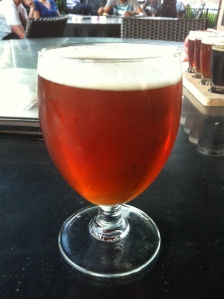 I’m probably going to get torn apart for this but I was not the biggest fan of the 120. The first sip is good with a great IPA flavor but I feel the aftertaste kills the beer. I find it tastes like someone dropped a shot into the beer. I know this is a high alcohol content beer but I’m just not a fan of the after taste. Overall I enjoyed the my first event of Philly Beer Week and look forward to the next one.