I have to credit this recipe to my dad. He loves southern food and found this recipe the other day and said I should make it. I wasn’t sure how it was going to turn out but let me say I was very happy with the finished product. If you use the jalapeno peppers instead of the bell peppers this rice brings the heat. This rice is a great way to dress up a common side dish. Enjoy 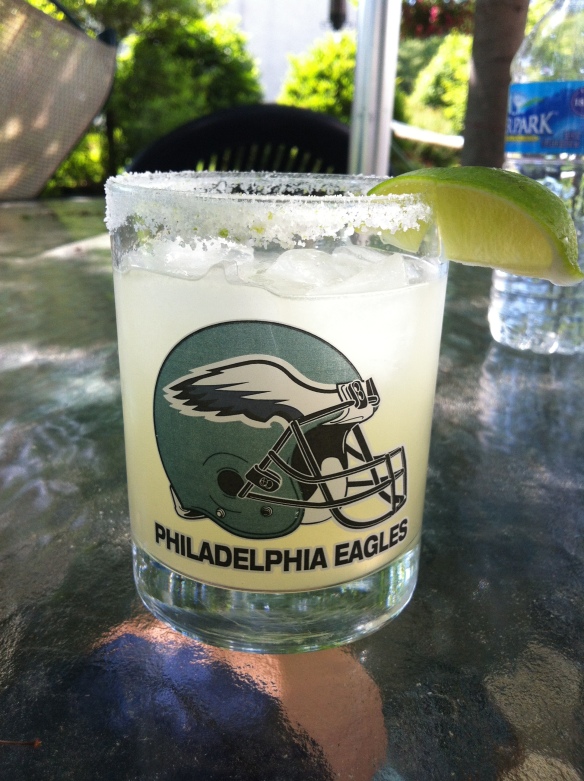 After a long day of cycling and putting in our garden I decided to put the limes I had to good use by making a margarita. I am a huge fan of margaritas on the rocks. When I first saw the recipe for this drink I thought it was going to be strong on the tequila taste. However after trying it it was light and refreshing. This will definitely be a mainstay on the weekends this summer. Enjoy!

Along with the lamb from the previous post I also grilled up some littleneck clams and made a nice herb butter sauce to go along with them. This was the surprise dish of the weekend and it turns out I should have bought more clams, these guys disappeared as quickly as they came off the grill. The butter sauce complimented the clams perfectly and grilling the clams made them come out tender not chewy. Give them a try this summer at a BBQ to impress your friends and family.

Over Memorial Day weekend I took full advantage of the warm weather and put the grill to good use. Unlike the lamb chops I cooked a few weeks ago, this time I mixed the spices and herbs in the oil and dredged the lamb chops through the spice mixture before grilling. I really liked how this technique worked with the lamb. Spicing the oil imparted a lot more flavor onto the lamb then the rub. If you are looking for a change up for the grill give these a try. Enjoy! 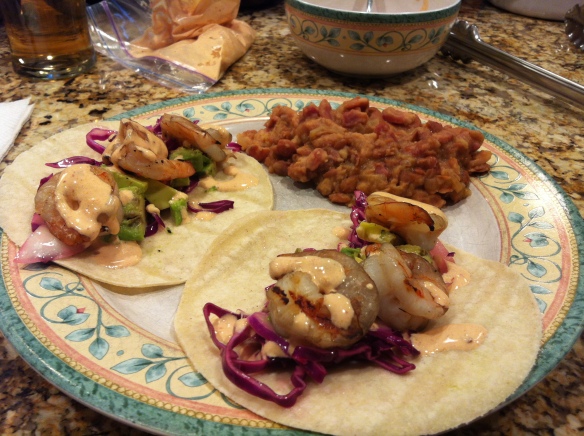 Monday was Cinco de Mayo so I decided to get into the spirit of the day and made Shrimp tacos. This dish is light and refreshing and I will be making it quite a few times this summer as the heat sets in. Along with the tacos I also made the refried bean again which are fast becoming a go to side dish because of how easy they are to make and how delicious they are. Give these a shot some time this summer and enjoy them with a nice cold beer or margarita!

It’s been busy over here the last few months but last night I was able to get back into the kitchen and make something new. This is a spicy Italian chicken dish that is quite fun to put together. I chose to serve it over polenta but it would also work over pasta. Give it a try and stay tuned for more posts. Smartchef Blog is back up and running! 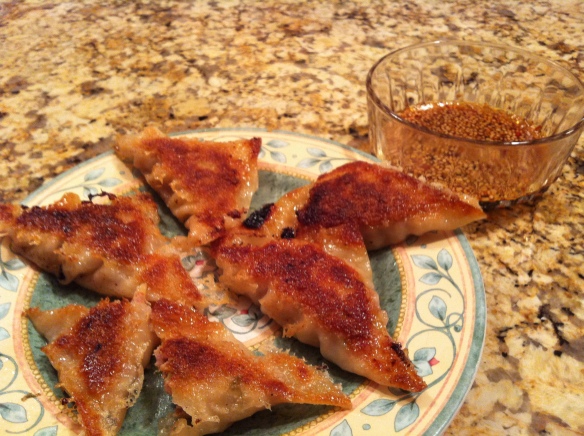 For the Superbowl last weekend I made these pork dumplings. They are quite easy to put together and make a good party dish. I had to mess around with the dipping sauce a bit because the first attempt came out too vinegary. This is a good dish to make if you are having a few people over, it’s even better if they want to pitch in and help put the dumplings together! Enjoy!

This past weekend I finally made beef wellington. This dish has been on my list of dishes to try ever since seeing it on MasterChef. I did a lot of preparation and research before making this dish so I could understand all the steps involved in making such a complex dish. I combined a few different recipes but this video was a big help in seeing how to execute some of the more technical aspects of this meal, beef wellington video. This recipe is for special occasions. It takes a lot of time to prep but in the end it turns out great. just make sure to take your time as you work through the recipe and trust your meat thermometer. For a nice medium rare pull the wellington out of the oven when the internal temperature reaches 125. As the roast rests it the temp will rise to 130-135. When cutting the wellington use a sharp chef’s knife to prevent the pastry from shredding and falling off. Enjoy.

Tomorrow morning I am going to the open casting call for MasterChef in Philadelphia. I have been working on the dish that I will be presenting for a few weeks now and am finally happy with how it tastes and how it looks when plated. Coming up with this dish was a fun experience. It allowed me to work with blending and mixing flavors as well as helped me with plating creativity. I’m very excited for this opportunity and will write about my experience at the casting call in an upcoming blog post. For right now I’m keeping the dish I am submitting a secret but I will also write about the process I went through to create the dish in a future post.

This post will be much different than my usual food posts. I started watching Breaking Bad early on and thought it was fantastic. I was happy to see how popular it became as the last half of season five premiered this summer and loved even more as its popularity grew from week to week. For the longest time I was 100% a supporter of The Wire as being the best television series I had ever watched. After yesterday, Breaking Bad now holds that top spot in my opinion. I loved every second of the finale. Vince Gilligan wrapped up every loose end imaginable, which was perfect for Breaking Bad. Walt was able to provide financially for his family with the help of Grey Matter. The best hit men West of the Mississippi moment was classic Walt using his wit to make sure his final wishes were completed. Walt finally admitting that he didn’t do all of this for his family but for himself was great. He finally stopped lying to himself and his family in that moment. My favorite aspect of the finale was how the story ended for Jesse. I think every Breaking Bad fan was happy that he was able to kill Todd for everything he put him through. Although it was predictable that scene was so fulfilling. Jesse finally standing up to Walt and not killing him I felt fortified Jesse as the only force of good in the dark world of Breaking Bad. He said he didn’t want anyone else to die and stuck too it. Although you are lying to yourself if you didn’t think he was going to run Walt down with his car a few times as he pulled away. All in all I was very pleased with how Breaking Bad was wrapped up, sad to know that the show is over but I enjoyed the ride. And Yes I made Blue Sky rock Candy. 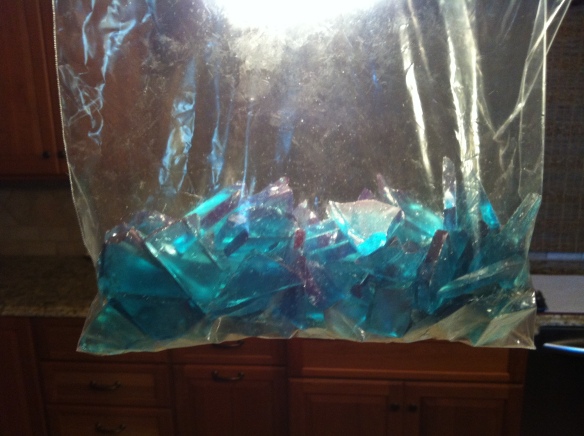 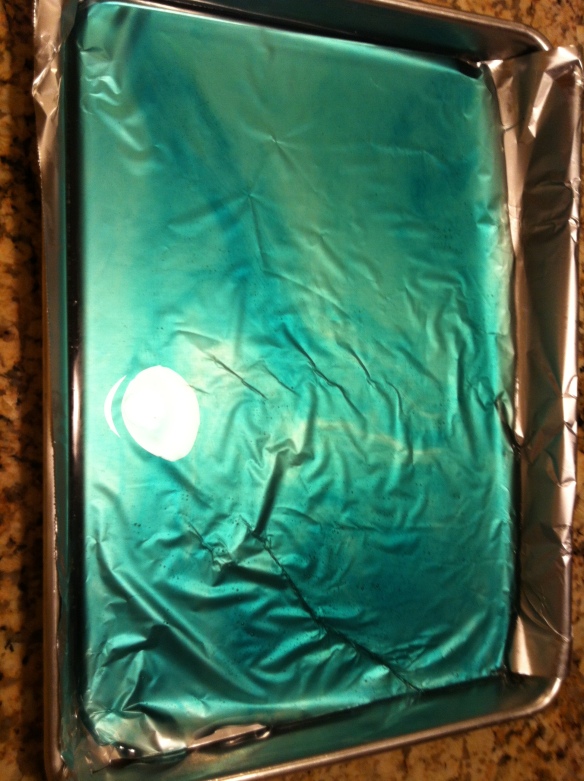 And Yes I made Blue Sky rock Candy.