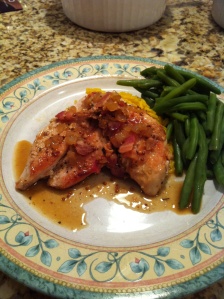 Tonight I continued my series in cooking with beer. The beer featured in this recipe is the Blue Heron pale ale from the Mendocino Brewing Company in Saratoga Springs, NY. I chose their pale ale because I thought its flavor would work better with chicken. Their beer is also great for drinking. The pale ale very good but my favorite beer the have is the red tail ale.

The recipe for the sauce has the same proportions for many of the other pan sauces I have made. You can get creative and switch out different ingredients to build new flavors.  Their pale ale and the bacon in this sauce worked great with each other and built a very complex flavor into the sauce. You can also use this sauce with beef or pork. However if you are making it for beef substitute beef broth for the chicken broth. You can find the recipe below as well as a link to the Mendocino Brewing Company’s website.