On Mother’s Day I cooked dinner for my family. The menu was made up of Fillet Mignon with the Guinness reduction, double stuffed potatoes with cheese and bacon, sauteed mushrooms, and oven roasted asparagus. Putting the meal together turned into a family effort with everyone pitching in on various parts of the meal. I’m getting closer and closer to perfecting the Guiness reduction and should have the final version of it nailed down in the next few attempts. With this attempt I was focusing on getting the right consistency to allow the sauce to grab onto the steak better. For dessert I made bananas foster. Now I am not a huge fan of cooked fruit and was surprised with how well it turned out. The bananas foster will be getting a dedicated post in the very near future. I hope all of you also had enjoyable Mother’s Days. 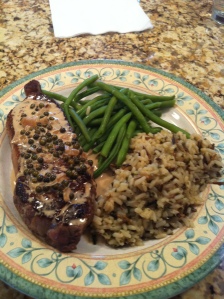 So after eating the enchiladas I made on Cinco de Mayo for breakfast, lunch, and dinner the last few days I decided I needed a change for dinner tonight. I went to the grocery store after work and just wandered around until something struck me. I walked past the meat case and saw some beautiful looking New York Strip Steaks. I Then came up with the idea to pair the steaks with a simple green peppercorn sauce. The sauce itself is very simple and you make it like you would an other pan sauce. The recipe I came up with makes enough for roughly 3 steaks so if you are cooking for more people you may need to tweak the recipe a bit. you can find the recipe by following the link below. Enjoy! 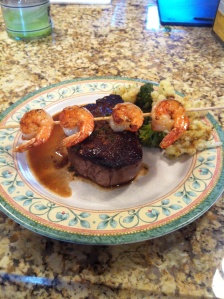 Inspired by St. Patrick’s Day I worked on perfecting the Guinness pan sauce that I made a few weeks ago. Before cooking the steaks I took 4 cups of beef stock, carrots, celery, garlic, and onions and placed them in a saucepan; I then reduced the broth by half to build more flavor in the stock. After fortifying the stock I cooked the steaks in the pan. I sauteed half a shallot then deglazed the pan with 1/2 cup of Guinness. I reduced the Guinness by 2/3 then added the fortified beef broth. I simmered the sauce for ~2 min then added 1tsp dijon mustard, 1 tbs soy sauce, salt, and chopped fresh parsley. I let the sauce simmer for another 2 min then added 1 tbs unsalted butter and 1/2 tsp truffle butter. I then did a final taste to get the salt level right. I then served the sauce over the steak.

To cook the shrimp I took a cast iron skillet and cooked 4 pieces of bacon. I then added the shrimp, which I seasoned with Old Bay and cooked them in the bacon grease.

After experimenting with the duck dish earlier in the week I wanted to make something that used the duck fat I had saved. In the end I decided to make a Normandy style pan sauce to put over pork chops. This sauce is very rich and packs a lot of flavor. It would go well over chicken and lamb as well so feel free to mix it up.

Tonight I decided to experiment with a pan sauce for a steak. I seasoned the steak with kosher salt and crushed black pepper then cooked it in a frying pan in equal parts olive oil and butter. Then the fun started. there was no set recipe so I will just walk you through what I did. I first threw some finely chopped shallots into the pan and cooked them for about a minute until they were soft. I then deglazed the pan with Guinness and let it reduce down to about a spoonful. Next, I added beef stock to the pan and I also started salting to get the seasoning right. I let the Guinness and beef stock mixture reduce down to about 2/3 of a cup. I then added about a teaspoon of Dijon mustard, a tablespoon of soy sauce, and some chopped fresh parsley to the sauce. I turned the heat down and let it simmer for about 2 minute. Finally I added a tablespoon of unsalted butter and about half a teaspoon of truffle butter. Once the butter melted i stirred the sauce and salted one last time. The sauce was very rich and flavorful and complemented the steak quite well. I’m becoming more and more a fan of making pan sauces because it lets you get creative with building flavors to compliment a main dish.